October 29, 2009
Last week a colleague complimented my hairstyle. Genuinely. She wanted to take a picture and show her hairstylist as a suggestion for herself. And I certainly didn't want to be offensive when I
laughed and laughed at her.

See, I used to have very short, cute, urban hair.

Then I got kind of tired of HAVING to get it trimmed every four to six weeks and began to envy ponytails on others. So a year and a half ago or so I conspired with my stylist to grow it out. It was agonizing. All of the layers were different lengths, of course, and as it started to grow hair would stick out in all sorts of odd directions. For a while it just looked like an overgrown short cut, and then it began to look even more awful. Every 8 weeks I would creep whimpering back to her and she would reassure me that it actually was growing, and it wouldn't take much longer, and she'd even it out a little and send me on my way. 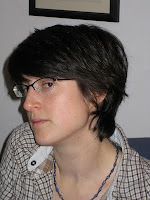 Understand, I am very hands-off with my hair anyway. I do not own a blow-dryer. Or styling products. Actually, with my short haircut I didn't even own a comb. I wash it, I towel dry, and I go. Trying to control its length is foreign to me. It got short when I lived in Rogers Park, in Chicago. I kept going to the same hair salon at the end of my street. They didn't really speak English there, but they were so convenient, and only $15 for a cut! I'd walk in and make snipping gestures with my fingers, and someone would cut my hair. It kept migrating shorter and shorter, but it always looked fine, so I went with it. 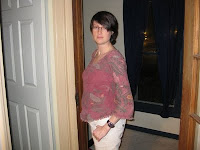 The growing-out process was ugly and awkward. It required barrettes and clips, and regular attention, and on since I was also increasingly pregnant and therefore FAT it nearly reduced me to tears on several occasions when I caught sight of me in the mirror. But we were almost there. Nowhere near a ponytail, but almost to where I could tuck it behind my ears and forget about it. And then I had Zoe. 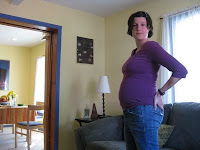 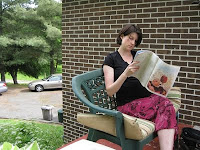 It's been three and a half months now since I've had time to even think about my hair, much less visit my stylist. My transitional haircut is now a long transitional haircut. There are numerous different lengths on my head, and the ends all flip out erratically. I still don't do anything more than washing and combing, and not even every day.

Thank you, Cindy for making my day - but it's not a hairstyle. It's just hair. 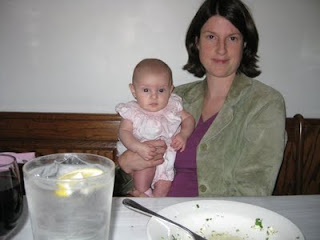