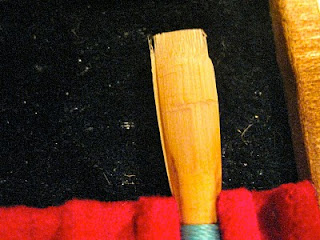 This is why I keep so many reeds around. Not because I ever thought I would want to use this misbegotten looking thing in public, but because today it was unexpectedly the best reed in my case for the task at hand. That task was playing Stravinsky's Petrouchka, a piece filled with aggressive articulation for the oboe and loud tutti sections that don't need to feature me but which I would like to be able to blow through. We were on stage at the Morris, a fairly dead stage that requires a very resonant, not to say buzzy, reed to project on, on an unusually cold and crisp day in spring that rendered all of my "good" reeds mushy and small.

My students know that I get on them when they have just one reed in their case - anything could happen to that one - and three is much safer, but twenty is safer still. After all, you only need one reed - but it has to be the right one.

Incidentally, we are performing Petrouchka this Saturday in South Bend, along with Beethoven's Emperor Piano Concerto (no. 5) and it's our final concert of the season and I am very excited about it. Click HERE for tickets and information.