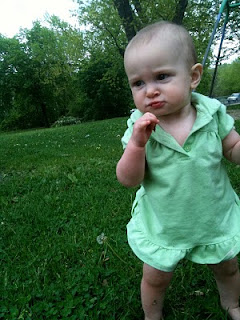 I wonder who Zoe is going to be. I don't know how much to read into the traits she has as a baby - that she loves a particular teddy bear, for example, or hates to have her diaper changed but thinks that having her bottom wiped is completely hilarious. These won't be identifiable features of her adult self, I suspect. I don't have a sense of her personality yet, and I don't feel like she'll be a real person to me until she starts talking - for now she seems like some sort of endlessly enchanting pet.

This, though, I have noticed. She's very stubborn about the way she approaches things. She goes at her own pace. She's learning to walk right now, and has just about got it. She can take a few steps from a standing start to one of us. But she knows her limits. If you try to plant her in the middle of the floor she refuses. She will not stand up. She collapses her legs beneath her and insists on sitting. As soon as you let her go, she turns and crawls - quickly and directly - to the person she wants, stops three steps away, stands, and walks on in. She will do this over and over - fascinated with the walking process but only doing what she can handle. She knows her limits and stretches outside them only by her own choice.

I've observed this in her before. When we were visiting relatives at Christmastime, I often had to get her from her nap and bring her into a roomful of strangers (to her). She would cling to me until she found other people she recognized, and checked everything out, and got her bearings. Once she had the situation figured out, she could be handed around and would be delightful and cheerful with everyone. Not before.

When we give her a brand new food, she immediately spits it out. She looks at it, smells it, and cautiously tastes it, and once it has passed inspection she'll happily eat and eat. But woe to the parent who tries to rush the process and cram food into her before she has accepted it.

I think that this firmness of hers is a legitimate character trait. She's very willing to try new things, but only on her own terms. Only when she's ready. I have plenty of oboe students who aren't nearly so methodical in their approach, and don't take the time to learn a skill or a passage well before moving on, and get predictably erratic results. To be fair, though, they can all walk perfectly well, so at some point they must have buckled down and learned, huh?

I love this process of discovering her. She's so mysterious, and so miraculous. As the encore in my spring recital series (last one is tomorrow night in Chicago! Check out the details HERE) I am playing Rodolfo's aria from Act One of La Boheme, and dedicating it as a love song to Zoe. I chose it for the first line - "Your tiny hand is frozen…" - which I say to her every morning because she never does keep the covers on at night. When I researched the lyrics, though, I realized how perfectly it represents our relationship and the wonderful way she makes me feel. I reprint them below, in a translation by Peter J. Nasou which I found HERE. (Obviously, my creative craft is different from Rodolfo's, but otherwise…)

What a frozen little hand,
let me warm it for you.
What’s the use of looking?
We won't find it in the dark.
But luckily
it’s a moonlit night,
and the moon
is near us here.
Wait, mademoiselle,
I will tell you in two words
who I am, what I do,
and how I live. May I?
Who am I? I am a poet.
What do I do? I write.
And how do I live? I live.
In my carefree poverty
I squander rhymes
and love songs like a lord.
When it comes to dreams and visions
and castles in the air,
I’ve the soul of a millionaire.
From time to time two thieves
steal all the jewels
out of my safe, two pretty eyes.
They came in with you just now,
and my customary dreams
my lovely dreams,
melted at once into thin air!
But the theft doesn’t anger me,
for their place has been
taken by hope!
Now that you know all about me,
you tell me who you are.
Please do!