August 25, 2010
We listened to auditions today for the South Bend Symphony - violas and cellos - and it was utterly inspiring. I learn something from every audition I take, but I think I learn even more from the audition committees I sit on. Today's experience was a great reminder of what is important in music-making.

Obviously, good rhythm and good pitch. People always says that, and they are absolutely right. Those are the easiest things to listen for, and they are basic skills, and many, many people have problems with them. I noticed the problems, and noted them, and enough inconsistencies in an audition would cost the candidate my vote.

But there were a few auditions today that just made me sit back. Right away from the opening bars of the concerto I was in, and instead of listening for criticisms to write down I listened to the music being made. The very finest auditions we heard today cast a spell with each piece. I would glance down at my page at the end of 10 minutes and see
Concerto - yes
Mozart - yes
Shostakovich - yes
Mendelssohn - yes
and so on.

Now, do not infer from this that I was ignoring pitch and rhythm problems - these people were laying the material down. The fundamentals were in place and USED to good ends. But more importantly, there was a magic and a control to the way they gave each piece its appropriate mood, feel, and energy. No one played a perfect audition, but a finger fumble in the context of a piece that really sent me someplace is something I can forgive, whereas an audition that I am already picking apart for missed details can't afford any overt errors.

And I am ready to use this inspiration. The material I'm preparing for this weekend's outdoor performance is all made up of short movements, many of which are character studies or programmatic works of one sort or another. Up to now, though, my preparation has been about details - fingers, phrases, breathing. I have two more practice days to remind myself of the right feel for each work and practice performing - casting a spell for the audience with each movement and remaining committed to the piece, the gesture, and the mood throughout each. This is something I am good at, traditionally, but for some reason (shortness of time, large number of little movements, BABY) not something I had started thinking about yet for this set. I might have just worked details right up to the performance if not for today's inspiring reminder.

**Side note: Zoe predicted this for me. She's had a bear of a week - vaccinations and a subsequent two-day fever, three or four new teeth (she won't let us in to count) a 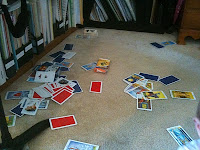 nd a black eye from a run-in with the corner of Steve's Macbook. So when she got interested in the tarot decks in my bookshelf yesterday I welcomed that as a reprieve from the constant whiny neediness and let her dump all of the cards out on the floor. I left the room, and when I returned she handed me the Ace of Wands and the Magician. The energy of new creative inspiration, and the skill, experience and control to make use of it. What an intuitive baby!