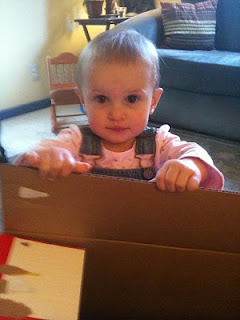 Back when Zoe was two and three months old we used to speculate about exactly when she'd become smarter than the dog. She certainly wasn't yet. She was working really hard on turning over and he was following commands and untangling his own leash when we walked and listening to us and communicating really clearly. He knew at least 30 or 40 words.

But lately it's very obvious who is on top of the evolutionary ladder. Zoe is 16 months old now and can follow complicated directions - pick up that magazine and put it in the recycling box, please - and I can't even count the words she knows and can respond to. She can say at least 12 actual English words and sign at least 8. She knows her favorite pages in her favorite books and can pick a specific one out of the bookcase just by the look of the spine, and bring it to be read

A month or so ago she was learning animal sounds. Obsessively. And she would learn a new one and it would be her new trick for a week or so, and then she would learn another. We were always on top of what she could do and knew to ask her about the cow, say, or the owl. All of a sudden, now, she is adding new words every day. I woke her up yesterday and she sat on the changing table and said Sit. She reached out for her boots and said Boots and put them on. We came downstairs and she said Cranberry, and ate almost the whole bag of craisins because I was so enchanted by her trying to say a three-syllable word.

She's changing so fast that I forget what she is capable of. I was putting her to bed last night, and she wailed every time I set her into the crib. Shrieked, really. I'd pick her up and we'd nurse again, or read another story, and when she got nice and relaxed I'd try to slip her back into bed and she would torque her body and writhe and scream. Then I remembered that she is a little girl, not a baby.

Zoe, I said, listen to me. I know you don't want to go to bed but I believe you are very tired. So here's what we'll do. I will put you in your crib, and cover you up with your warm blanket and put your favorite music on. Then I will go away and you can listen to the first three songs. After three songs I will come back and if you are still unhappy we can go downstairs and play a little more. Does that sound OK?

And sure enough, she allowed herself to be laid down and covered, and she smiled when her music came on, and as I had suspected, she was fast asleep by the end of the third song.

You can't explain things to the dog. As many times as I have said, Dude, it's not quite time for your breakfast yet, the big boy still hassles me every minute until he gets what he wants. Or, more often recently, I'll need him to go out but he doesn't want to - it's cold and rainy and his leg hurts - and in spite of all the words he knows we have to show him the food and hold it near the door and trick him into peeing first. His limitations have become clear. And hers are vanishing daily.

This is so exciting.