February 08, 2011
Practicing - really practicing to improve - is a very active endeavor. Just playing a piece over and over again will eventually make it more familiar, but that's a far cry from digging in and solving problems and making choices with the goal of being able to play consistently and well as soon as possible. In lessons my students and I talk a lot about how to practice productively. We discuss breaking a problem down to its smallest elements and solving those separately instead of just butting continuously against the same wall. Today I'll give an example of this process at work in my own practice.

I have a problem - the Serenata from Stravinsky's Pulcinella

. I've allowed it to be mediocre in my repertoire for long enough, and am determined to make it my friend. Here's my approach. 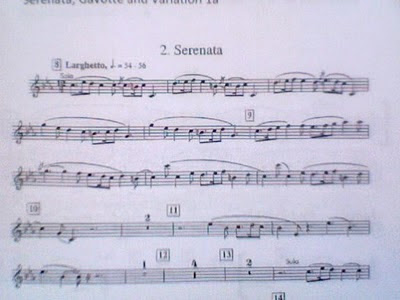 My first issue is just that the low Cs are plain hard for me. The lowest notes on the instrument require a special kind of air - lots of it but not too much - and a great deal of openness to the embouchure. They are not easy notes on the instrument, and because most of my work is as a principal oboist I don't spend a lot of time down in that register. So I am tackling those first. My warmup regimen already involves low attacks and long tones, but now I make myself stay down there until I can coast in on a quiet low C ten times in a row. One mistake sets me back to zero. This game is so tiresome and hateful that I concentrate very hard to get through it, and the result is that my average is already far better than it used to be.

Before I started this project, incidentally, I did check and double check all the adjustments on my instrument. Mechanical problems shouldn't make this harder than it is. Sometimes a given reed is balkier in the low register than another. I have no further tolerance for this tendency - if the reed won't play my new game I trash it, no matter how pretty it sounds.

The second problem is playing the low C after a middle C. The acoustic response of the instrument is vastly different for these two notes, and they need to be voiced very differently in my embouchure to sound good. So my second new game is playing octave Cs. One middle C, pause, one low C. Repeat. Ten times. Start again if I miss.

Of course, those two notes are not separated by a nice pause in the excerpt, so my third new game involves stringing everything together. I play the skeleton of the opening, eliminating the 16th notes and grace notes, and instead of trying to blow straight through the middle C to the low C, I lift a little and find the attack of the low note JUST LIKE I'VE BEEN PRACTICING.

Now, at this point I do dispense with the ten times in a row rule. I can only stand to be so militant. If I'm feeling solid on those first three bars, I start to flesh out the skeleton. I put in all of the notes, but keep my concentration on the hard interval. I find that by this point in my practice session I almost can't miss the low note, AND I've got a really strong rhythmic flow going. I use that strength and momentum to carry me through the whole rest of the excerpt, and if I've done good work I don't struggle with the final low C either. I'll repeat the whole piece as many times as I need to feel invincible on it, and then walk away.

This little session generally only takes 10 minutes or so, but I've turned it into a part of my daily warm-up routine so I do it all the time. By the next time I take an audition - or perform Pulcinella - I should be unstoppable on this excerpt.

So there is our basic practice technique in a nutshell. I analyzed the issue, broke it down to its most basic element, and solved that one moment - the entrance of the low C - and then gradually added in all of the rest of the piece. I make sure I can confidently and effortlessly perform each aspect of the challenge before I add the next step. I put in the time to make a good performance probable and not just possible, and because I planned and directed that practice it took me 10 daily minutes of focussed work instead of months of guessing and hoping and missing the notes.