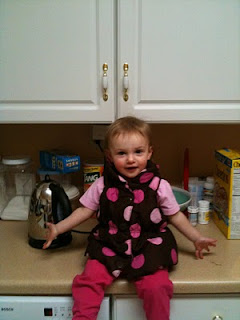 Zoe has so much language now, and so many words! What's fun, though, is that the words are very personal. She has excellent diction and is very careful to clearly pronounce the last letter of each word. Often, however, that last letter is wrong, which makes her hilarious.

For More, she says MoNe. Very clearly. For Car, CarDe. Egg is OcKe, and Coffee, CoffeeZe. Even words she used to say correctly have been reinvented. Since she learned to say her own name, ZoEE, which happened surprisingly recently, she has been adding a final EE to lots of words, including NoEE, HepWEE (Help), and HandEE. She is so CutEE.

She also has words that don't resemble ours very much at all. DOUCE for Stairs, KaDoo for Color, CoFoo for Cover, Saoot for Somersault. Pittee for Pictures, which really means my iPhone.

And although she generally only uses one word at a time, she is beginning to combine them a little. She will demand something, and then indicate where she wants it. Mote! HandEE! (I want that remote control in my hand.) Onu! Mouf! (I want that orange in my mouth.) Boke. Yap. (I want to sit in your lap while you read this book to me.)

Honestly, typing this out makes me kind of agree with her system - it's a lot more efficient. There are a lot more keystrokes associated with my version, but she gets the message across just fine. Why bother with grammar rules, anyway?

I don't even think I have a point in this post. Just, Zoe is awesome.