May 11, 2011
I had a really interesting gig last night. Technology is amazing.

I'm playing next week for a big event which is being taped at a huge sports arena in Chicago, and about which I cannot go into further detail. As I understand it the engineers are concerned that in that space our live music won't be heard or recorded at a high enough quality to put on television, so we met last night at a posh recording studio to rehearse and lay down some safety tracks. I love this amount of attention to detail. It's worlds away from the kind of attention and resources an orchestra at our level can devote to ANY project, EVER. This is how the big guys do things.

The challenging thing about a recording session like this is that the performance has to be perfect. Sometimes the notes are very challenging, more often they are not - but you never know that until you get there that day. What's on the stand can be four notes or the Rite of Spring, as my husband, the bassoonist, discovered to his dismay. Things can change suddenly, too - we were asked in the middle of our session to transpose one number on sight.

Either way, once the "tape" is rolling, one wrong note or missed attack can cost the take, and there are 15-20 musicians and multiple producers and recording engineers who are being paid for every minute they spend in the studio, so there is a lot of pressure to do it right the first time (and every subsequent time). I was keenly aware of this and worked hard to make sure we didn't have to go back for me. My colleagues are wonderful and very professional players, and were spot-on every time, even as the night got later and later.

Because here's the most interesting part. Our orchestra of strings, winds, and harp was in Chicago, but the keyboard, rhythm section, horns, and music director were in LA, doing the same project at the same time. As soon as they got a take that was just what they wanted, it was sent electronically to us, and then we had to layer our material on top of theirs. At times we had to sit around just waiting fo 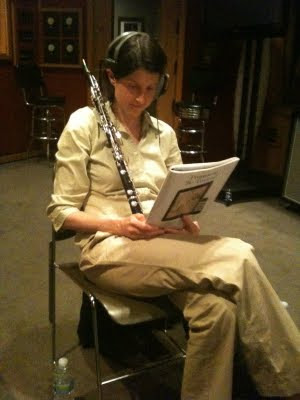 This way, when we come together next week to do this live, the music director will have his accustomed key players, but they won't have had to fly an entire orchestra across the country to play for one day. Technology is amazing. I love this work.