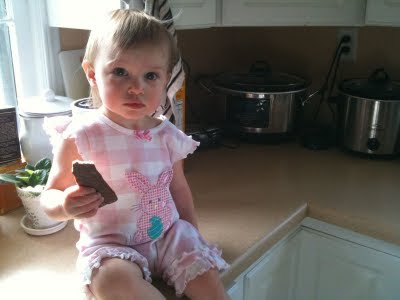 Zoe is talking our ears off these days. She regularly says two words at a time, because single words are for babies. Never three, though, as befits her only-as-fast-as-I-want-to-go attitude. (We were at a one-year-old's birthday party recently and I was fascinated to see the baby practicing walking by holding his mother's hands. Zoe never never did that. If she can't do it "Self" she will not do it at all.)

I love that her first constructions are not subject-verb sentences, but descriptive labeling. Now she says Sad Baby and Awful Dog and Humongous Stick ("Mungo Tick") and Terrible Cough and Run Fast and Mommy Duck (about a female mallard, not as a command to me). I sense a lucrative career in advertising, which is fine. At least it's lucrative creative.

The amazing thing is that I've been with her almost non-stop these past two weeks, due to my recent oboe avoidance, and even though I've observed every step I am still shocked by how fast she's developing.

She said "soggy" today, accurately describing a dishrag, and I have no idea where she got that word. And she's been talking about Mickey Mouse for a few days, and today added Daisy Duck - though as far as I know she has never seen a Disney cartoon or book. (Whoever introduced her to Mickey should please tell me, lest I submit her to scientific study on her apparent instinctual knowledge of American culture.)

She has better social skills than I do, which is ridiculous, since I made her. She learns visitors' names immediately, and continues to ask about them days after they leave us. She greets strangers on the street, unprompted, and refers to them as "friends".

Where did this little person ("Yittou Pousou") come from? Are all babies this astonishing? How is that possible?