We just bought a piano.  I feel like such a grownup.

Now, despite taking lessons from third grade through eleventh, and despite graduating from a conservatory with a two-year piano requirement, I cannot play the piano at all.  If it were just about me we would not have bothered.  A piano is a BIG piece of furniture, and it weighs you down and ties you down.  It's a commitment.

But I remember having a piano in my house when I was growing up. Unlike a keyboard, or a record player, or even a radio, which an adult has to operate for you when you are small, a piano is always right there.  I spent hours just fooling around on it, and picking out tunes, and figuring out how it worked.  I could play the M*A*S*H* theme by ear before I entered school, and could pick out melodies from Disney movies or Broadway shows.  I determined that there is only one place on the keyboard that you can start Chopsticks and have it work out with no black keys.  I discovered a dominant seven chord all by myself - G-Bb-C-E - and played it every time I sat down because it sounded so cool. I didn't discover any of the other inversions or any other keys - harmonies have never been my strength - but that one was mine and I felt a kinship to it.

We always sang around the house but it was the piano that taught me that pitches are specific and not nebulous. You can start a song on any note but the intervals after you start are fixed, and they look different in different parts of the keyboard but you can always find them.

In other words, before I ever began to take formal lessons and before I had even heard of an oboe I had an intuitive sense of keyboard theory and a visual way to understand high and low notes and an ear for melody, and I want Zoe to be able to play with a piano in the same idle, figuring-it-out-for-herself way.  She doesn't need to be a musician, but I need that option to be available for her as it was for me. 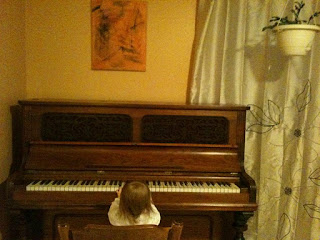