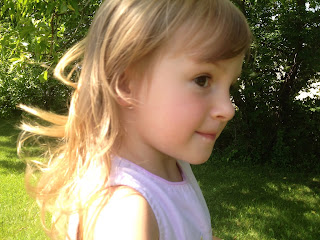 Zoe got herself lost in the grocery store again today.

“Mommy, can I look at that?” she cried over her shoulder as she scampered off.  I continued to shop.  Ten minutes later I was paged and collected her from the service desk - she had found a nice lady with kids, asked for help, and given her name and address and my name and indeed the grownup did know what to do and everything worked out just like it was supposed to.  Again.


Zoe’s never liked to ride in the cart - she’s an active person and doesn’t want to be pushed luxuriously through the store as someone else does all the shopping.  This would be yet another way that we are different, I suppose.  So we instituted the Shopping Rules, which she knows well and can quote to me as we enter any place of business.   She is not to touch things, not to run away, and most importantly to STAY WHERE SHE CAN SEE ME.

I liked this rule because it put the burden of staying close with her instead of me.  After all, I had my own reasons for being in the store, and being responsible for herself was empowering and gave her something to concentrate on so she didn’t get into too much trouble.  That was the idea, anyway.  I wanted to get my shopping done - I hate shopping - and I was NOT going to be that parent searching anxiously through the aisles for a runaway toddler.  She could stay nearby, or she could have the experience of being scared and lonely and perhaps learn to obey the rules.


Since she could talk, we’ve spoken with Zoe many times about what to do if she gets lost or separated from us - imagining all the while a RARE scenario in a large crowd or a dark theater or a mountain trail.  It has always been important to me to give her these skills, because things do happen.  People do lose sight of each other, and she needed to have the tools to navigate back to us.  I have no interest in raising a helpless child.  I’m so glad that she knows how to ask for help and how to use all the right words to help herself - but so irked that she now thinks it’s perfectly OK to do so.

With all the confident entitlement of a beloved child, she knows that the world will stop to help her, but takes no particular responsibility for seeing that it doesn’t have to.  She cheerfully disobeys as many rules as she wants, and then the moment she gets a little anxious she asks for a bailout.  And it works for her every time.

As a grownup, though, I do see the flaw in this.  She doesn’t grasp that NOT bothering other people is a virtue.  People are kind, and will help a little girl who asks nicely, but no one has unlimited extra time in their day to see that girl safely home.  It’s not acceptable to inconvenience strangers unnecessarily.

It’s frustrating.  Zoe is fiercely independent - a week before turning four she gave me a huge lecture: “Mommy, I’m getting to be a big girl now.  I know the parking lot rules.  I can watch for cars.  I will walk beside you but I don’t need to hold hands any more, OK?”  And she won that battle.  How could she not, with such a reasoned, articulate argument?

I don’t want a power struggle about keeping her in the cart in the store - she isn’t a baby, actually, and I don’t mind her looking around and experiencing the sights and sounds on her own terms.   Am I going to force a five-year-old Zoe into the cart?  A thirteen-year-old Zoe?  She’s a big girl and can use her own muscles.

But now that she’s cracked the code, I don’t seem to have a leg to stand on.  The terror of possibly getting separated from my mother was impetus enough for me to obey the rules as a young child, but she knows she can get by.  I don’t want to scare her with unlikely stories of stranger danger because I don’t particularly believe in them myself and because I love her confidence and verve.

We went to her school last night for a cookout, and EVERYONE knows Zoe Ingle.  She proudly introduced me to a few of her friends, but ALL NIGHT kids from all over the school were coming up and greeting her by name.  She’s the tiny queen of the pack.  I admire that intense noticeability she has, and the energy she gives to a room and her gregarious self.  Is my own hesitance to bother people a character flaw, compared to Zoe’s level of perfect confidence in her own importance and worth?

Unfortunately, it seems that she’s gotten a little over empowered.  She has learned how to make the system work, so she can ignore my rules with impunity.  She thinks she’s doing it right because she’s using the skills we taught her, and it always ends well because someone always brings her back safely.  I want her to stop bothering people, and to just obey, already.  You know, while growing up to be an independent human being and an independent thinker and the born leader she is.  I have no idea what my next step might be.