August 25, 2016
This is the week.  I'm meeting Paul today for one final rehearsal, and we're driving down to Fort Wayne to spend the night so we can be ready first thing in the morning.  Tomorrow we record my CD.

I've been working on this project for a long time. My original Music That Should Have Been Written for the Oboe program happened in 2004!  Music That Should... Part 2 was in 2014.  I wrote the grant proposal that set this CD in motion in December of 2015.  This entire summer of 2016 has been devoted to reworking my repertoire and becoming Ever More Awesome.

And of course, the project will not be completed when the tracking is.  I need new photos, and graphic design.  I need to write the copy for the liner notes.  I need to get the thing reproduced, and distributed.  And I don't 100% know how to get all of these things accomplished, not yet.  But after this week I can know that the most delicate, touchy part of the process is over. I can have a THING to be proud of.  I can relax on this particular set of difficult repertoire and look ahead to new exciting music for the spring while I work through the next stages.  I have hopes that this album will be out before Christmas.

What have I learned?

I went into this entire project with  the goal of making myself better than before.  I figured that having to be CD perfect would really force me to work hard.  I've said this before, I think - but when I prepare for an hour long recital or even for a 25 minute concerto performance, I strive for perfection but I KNOW that it won't be perfect.  Live music is too exciting  to be careful with.  And a live audience - especially an audience that came out to hear an evening of OBOE MUSIC - deserves that excitement.  They deserve some showmanship, they deserve a show.  And I have big ideas and I choose great music and I want them to enjoy the show, and I don't feel like clinical perfection is the goal as much as awesomeness.

But on a CD, now, I think it has to be perfect.  Awesome, too, yes, but noticeable mistakes preserved for all eternity are not acceptable. So I've been working for perfection.

The thing that has liberated me in this process is that I don't have to play my hour of music ALL THE WAY THROUGH.  I can take small sections, and nail them.  In a long recital, I'm thinking about protecting myself, and saving energy and embouchure for the big moments.  In the recording session, I can give it all all the time.  At least, that's my plan.  I'm excited to point out that there is nothing in my material that I can't play in isolation.  There are passages I can't quite handle  while exhausted and oxygen starved.  But I can play anything by itself, in controlled conditions.  I feel like I've been preparing forever for exactly this project. 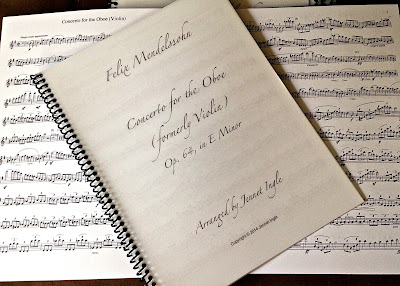 There comes a point at which you have to admit that you are where you are.  A month out, I generally assume that my reed case will be filled with greatness, because there's still time to make it and put it there.  A week before, this goal is still plausible.  But today, what I have is what I will have.  The selection IS better than it was a month ago.  My playing IS better than it was a month ago.  But is it perfect? No, it's still me. So I'm going in, optimistically and eagerly, prepared to play to my optimum level, and to present myself at MY very best.  I won't be better than me, but hopefully me at my best is good enough.