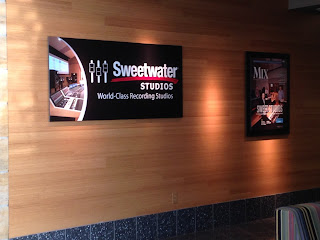 It's not finished yet.  That's why I haven't talked about it.  But recording my CD at a professional
studio has been AMAZING.

I'll take you through my experience.  I played into a microphone in a room, and it sounded, to me, like me.  I was disappointed.  I had sort of imagined, perhaps unrealistically, that just being in the studio would make me sound better, more like the real oboists on the recordings.  But it was still me.

I heard the first take played back through my headphones, and I was kind of impressed.  Who knew I could play such cool music?  In the moment, as I'm doing it, I'm too focused on doing it to notice the effect, but some of my material is REALLY GREAT! Some of the technique sounds very impressive.  I love the music I am presenting, and I was pleased to have this record of my hard work.  That could have been the end of it for me, and I would have been happy.

But then, I stepped into the control room, where the engineer was sitting, and heard what he was hearing. Paul and I were isolated from each other as we played, and I heard him only through my headphones. Furthermore, I knew full well who I was and thought I knew what I sounded like - but I was blown away by the quality I heard through the speakers. The piano and the oboe were rich and lush.  I sounded just like the great oboists on the great recordings!  It sounded REAL.  It sounded LEGITIMATE.  It sounded GOOD.  WE sounded good. I sounded good.

I don't think this has ever happened before.  I heard my own musical voice on a recording and I liked it. It sounded like the sound I aspire to make, and never think I achieve. The equivalent visual trick, I think, would be to give me a full hair, makeup, and clothing makeover and have me turn out magically looking like Scarlett Johansson, or Michelle Obama, or someone legitimately gorgeous like that. We don't have the technology to make me really look like them - I hope - which makes me kind of sort of believe that the beautiful playing I heard was really me.

Yes,  quality speakers.  Yes, seriously expensive microphones.  Yes, the skill of the engineer.  I couldn't have made a recording like that in my room with my phone.  But in the end the technology can't actually play the oboe, and I can.  It's kind of a heady feeling.

There were disappointing surprises in the process as well.  I had worked so hard and worried so much about the technical parts of the pieces, but for the most part those sections were just fine.  The bulk of our time was spent in going back to the easy stuff and fixing a little muffed attack here, some water in the octave key there, a slur that didn't speak cleanly.  The things that we kept having to repair were the things I'm always not so good at, the tiny details that sometimes I allow to get by in the practice room, the things that the oboe is always out to get me on.  I know that I'm not always perfect, but it was jarring to recognize just how many LITTLE sloppinesses could slip in even as I was striving so hard to be pristine, to get things in one take, to not waste time.

In other words, perhaps I sound better than I think I sound, but I am not as competent as I think I am, and that was a little dismaying to discover.

In all, I was incredibly happy with the first day of recording.  We didn't quite get everything recorded, and we didn't finish the mixing process, so I'm going back tomorrow to complete this stage of the project. And it feels wonderful, and I can't wait.