September 21, 2016
I'm learning a piece now which features quarter tones, or the pitches that fall in between the normal 12 notes that we are accustomed to in Western music.  I have never worked with quarter tones before.

In works such as Ravel's Piece en forme de Habanera or Alyssa Morris's "Yellow", from Four Personalities, we see pitch bends.  These are usually done with the embouchure, and I have no problem moving most of the notes on the oboe even as much as a half-step up or down.  But this technique always involves a certain amount of scooping in the sound - I hit the real note then schmear my way to the adjusted one, and in my experiments this week I found that I was unable to reliably guess my way to a clean attack on an altered pitch using only my embouchure and air as a guide.  In other words, if I finger B natural, I can adjust that easily to a quarter step flat or sharp, but can't reliably hit that quarter step straight on without having to wiggle for it.  And this makes sense.  I am in fact fingering a B, and the oboe wants to play in tune, and all of my decades of study make me want to play in tune as well.

When I performed Qigang Chen's Extase, I did a lot of glissandos and pitch bends that were fingered.  In other words, I would finger a real note then slide with intentional slowness off the hole or off the key, releasing it gradually and using lots of air to force the pitch to bend upward or downward.  This is also not quite what I need for my current project. I am asked to play intervals such as C to Eb+, or G to F- and predictably hit the note that is exactly 3 half steps plus a quarter tone, or two half steps plus a quarter tone away.  I need an entirely new set of fingerings. 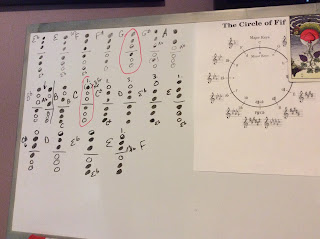 Fortunately, there is a book.  So I spent a few days looking through diagrams, experimenting to see what worked best on my instrument, and making terrible sounds, and eventually found a full set of fingerings that I could use pretty well to split the difference between every half step.  They don't all sound amazing.  The oboe is designed to play the traditional 12 pitches of our western scale - BARELY! -  and all of the fingerings I'm using involve some degree of compromise.  Some are more muffled than others, some are more blaring.

I spent two or three days working on finding and hearing that middle place between G and Ab, say, and between C# and D.  Yesterday I took one of my tuner apps and recalibrated it to listen to my between-pitches, and practiced playing chromatically within that quarter tone scale.  In other words, leaving out all of my REAL notes, and playing chromatic scales that registered IN TUNE on my tuner which was set exactly half-way between A and Bb.  That was much easier for me to hear - even though the pitches are technically WRONG, and the fingerings are complex and tricky, my ear is well attuned to hearing half steps, so I quickly adjusted to my new pitch center.  Now that I was working for intonation and evenness within the quarter tone scale, I was able to adjust some of my fingerings for sound and timbre.

My next steps will be more difficult, I think.  I need to work on intervals between my "real" and my "fake" fingerings, and start to try to hear what "in tune" really means when those intervals are CRAZY to my ears.

Honestly, I think that the piece I'm working on, Charles Dakin's Tarot de Marseilles - of which I could not find even a mention online, much less a a recording - will wind up being an awfully hard sell to an audience, even with all the schtick that's part of the piece.  The concept is that I shuffle and lay out all 22 Major Arcana cards randomly, do a live reading as I perform the little short vignette that goes with each, and in the end interpret and play the conclusion, the final five cards.  In practice, this will amount to some 15 minutes of aleatoric out-of-tune sounding solo oboe, and as much as I love the oboe, extended techniques upon it, AND the Tarot, I suspect this might not be a crowd-pleaser.

But that is a separate challenge, to be dealt with after I master the current one.  I'm fascinated with this new quarter-tone world that I'm exploring.  It's a far cry from Mendelssohn and Bach, and is giving me a lot to think about, and I LOVE THE OBOE.

Some of the links in this post are affiliate links, which means that if you click on them and place an order I get a tiny commission at no cost to you.