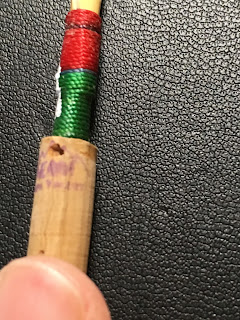 Right at the end of last year, right as I was sailing into the last Holiday Pops concert of a long season, I made a reed.  It was a good reed - one of those reeds that is good right away, so I didn't have to wonder or waste time fussing.  I liked it as soon as I made it.  It had a perfect balance of resistance and response, the sound was rich and vibrant, and it did what I wanted without having to be forced.  It was even colored just right for a holiday pops concert. 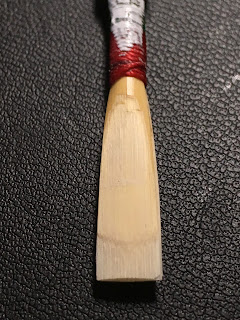 I played four services on that reed - one right after another, for three days - and it never required an ounce of maintenance.  No cleaning, no polishing, no refine-the-corners-again-and-clip, no worries at all.  Just soak it up and play all the music.  I called it my Christmas Miracle.

Subsequently I took a couple of weeks off, and when I came back in January it was STILL a great reed.  I recorded an audition CD on it.  Played it on a Mozart concert.  Put it away for another few weeks and then used it for our exciting Muses's Workshop chamber music concert last weekend.  It was still gold Monday night and I played it for my CD release concert.

It's incredibly rare for a reed to be that good for that long, so although I am not a measurer or a saver I decided to record this one's specs for posterity. 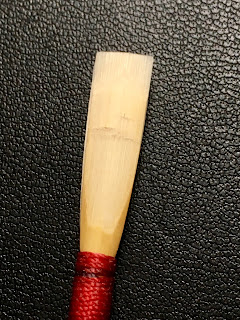 Let me say, I'm very much a math person in my life.  Numbers are my friends. I LOVE a metronome.  But my approach to reed-making is much more intuitive, and much more about reacting to the individual piece of cane I'm working on.  I don't generally take any micrometer readings at all, and use my length benchmarks only as a guideline.   The numbers I'm going to cite here would mean more to me if I was more aware of my norms - but I'll be interested to be able to look back on this during a reed slump sometime, or to hear from other oboists as to how these compare to their own standards.

The reed was wound on a 47mm brass Sierra tube.  I would have wound it at 73mm (that's a number I stick to) although I didn't make specific note of that at the time.  Who knew it would be so good? 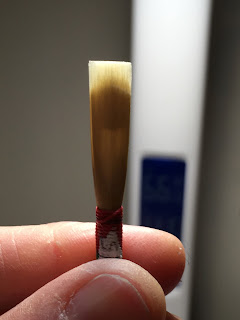 As you can see, the cane cracked just above the thread on both sides.  This is a thing I don't like, but I don't automatically discard a blank with this issue - and a good thing, too, in this case!

Shape: Samson+1
Finished length: 70.5 mm
Height of rooftop (at the gutter): 65 upper blade, 65.5 lower blade (It is NOT intentional that the upper blade sits lower than the lower blade.  Don't know why it happened.)
Bottom of heart: 60 upper blade, 60.5 lower blade (Again, the  asymmetry is unintentional - if this had been a reed I had to fuss with I would have fixed it.)
Thickness, center of heart: .51 mm
Thickness, center of tip (a little back from the very tip.  How do we indicate that spot, people who measure things?): .15 mm
Thickness, corner of tip: .08 mm, quite symmetrical for all four corners 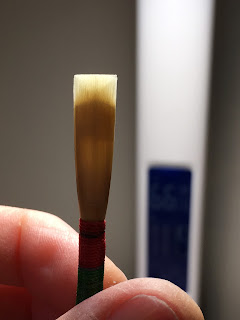 So interesting, right?  At least, I mean, to the five people who are still reading, not to all of the people who clicked into this post expecting a heartwarming story of some sort...

March 15, 2019
When we started the opera cycle (An American Dream, showing at the Harris Theater tonight and Sunday afternoon), the four woodwinds were sitting stacked in a rehearsal room.  In other words, the flute to my right, the bassoon behind me, the clarinet behind the flute, just like in the orchestra.  And it was OK.  We were fairly close together, the room was resonant, and we were working on orchestral details.  But when we moved into the pit, this seating felt VERY isolating.  The four of us were far apart, on two different levels, the wall was right next to me, and intonation and ensemble were very much more difficult.  Our entrances and releases were not clean together, and because we had to balance to the singers on stage, I found my playing getting more and more tentative.  Don't be too loud, don't come in early before the clarinet, keep everything in the box, try to lead the entrances but stay in the texture... And it felt like everything that was not quite great was my fault…
Post a Comment
Read more