Some Gigs are Special

April 08, 2017
I work all the time.  In addition to teaching and making reeds, I play in a different orchestra almost every week.  Most nights find me out in a rehearsal or a concert.  Different repertoire each week, different colleagues, a different commute.  I take it all in my stride.

But sometimes there's a gig that is clearly special.  That is worth getting really excited and happy about.  That gig happened last week. 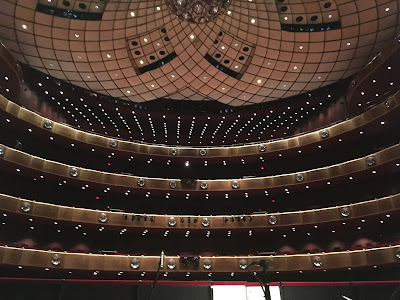 Steve and I got to spend a week in New York City, playing Prokofiev's Romeo and Juliet with the Joffrey Ballet at Lincoln Center, to packed and enthusiastic houses, with a great orchestra, being paid well.  It was fantastic, spectacular music which was genuinely fun to play every time, and it was the greatest city in the world.  This gig felt like the best EVER band trip, in that I got to do it as an adult with grownup social skills, sovereignty over my free time, and real money, instead of as a painfully introverted 15-year-old being dragged from site to site, trying simultaneously to be noticed and not to be noticed, and struggling to make my reeds work without the skills to fix them.

My favorite part of New York was just walking around in New York.  We'd google a site, map ourselves toward it, and explore the whole way.  Sometimes we'd get to the site.  Sometimes we wouldn't.  But we were not bored for one second.

We toured MoMA.  We toured the Hayden Planetarium.  We visited Innoledy New York Showroom and tried oboes and bought reed knives and picked up my repaired gouger.  We bought books.  We bought tarot cards.  We heard great jazz at a tiny club.  We strolled in Central Park.  We had smoothies, and sushi, and falafel, and street food, and LOTS of wine.  It was an entire week of Date Night with my husband and NO child. 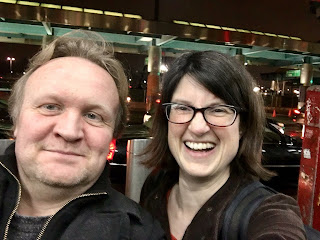 You know I love Zoe.  You know she's brilliant, and loving, and precious, and I love her more than anyone.  But the unimaginable luxury of NOT feeding her, NOT entertaining her, NOT wrangling her into bed every night at 8:30  - for an ENTIRE WEEK - really reminded me of how constantly hard parenting really is.

For a week we set our own schedule (yes, we occasionally did go to work), and even though Steve wasn't interested in the new age store and I wasn't that excited about the Planetarium no one whined, or complained, or dragged their feet, or demanded to be fed.  We had awesome meals out that never involved macaroni and cheese.  When we felt like eating peanut butter in our hotel to save our appetites and per diems for better things, no one objected.  When we wanted to nap in the afternoon, no one bounced on our bed.  When we wanted to sleep in, no one bounced on our bed.   We never needed to do laundry, no one spilled food on themselves, we both showered daily without having to be told to.

What's my point? The gig was so special.  We were both so lucky to be on it.  New York is great.  Parenting is hard.  I'm happy to be home. I love you all.