The Pleasure in Doing It 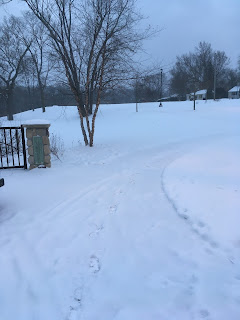 Sometimes I just like having run. After your shower and your coffee it feels good to have run, earlier in the day, and to feel that gentle ache and tiredness in the muscles that comes from having used your body productively. I don't always enjoy running while it's happening, and I HATE the snow.

But running in the snow is such a pleasure.  It's exhilarating.  It's freeing.  It feels like being a kid again, with the icy wind in your face and the triumphant feeling of doing something all by yourself.  Anyone can go out for a jog when it's 65 and sunny, but I was out this morning, in 22 degree weather, with the snow all blowing up in my face, and I met another woman running  - and as we passed each other we both raised our arms like Rocky and cheered for each other, and for ourselves, just filled with the
gleefulness of being in the club. The club of crazies.

This pleasure, the joy of winter running, is hard to come by.  It's HARD to power through the resistance of leaving a warm house.   No part of your body wants to go out there.  No matter how persuasively you try to tell yourself that you'll enjoy it, you know that it's worse outside than inside.  But once you start, for 30 minutes or so it's the best thing ever.

Similarly, you have to overcome some resistance to practice the oboe.  Soak up a reed, put the thing together, play the first few notes and sometimes you just say "UGH, so this is how it's going to be today."  The pressure feels bad.  The first sounds of the morning are not beautiful.  And it's tempting to put the thing away and go back to bed.

But there's a reward if you keep going a little bit. If you power through a few minutes of warming up, and you get into a piece of music you like.  Or one that has an interesting challenge.  Or one that makes you feel like someone else.  Or one that makes you feel like yourself.  At those times, the pleasure is not in having practiced, it's in practicing.  When you're in the zone, and you're focused, and you're overcoming resistance - just a little - there's nothing like it and you don't want to stop.

And it's that magic, that in-the-zone feeling, that only-I-am-in-the-intensity-of-this-moment feeling, that keeps us coming back.  Some months I'm less of a runner, some days I hate the oboe - but I always come back. The pleasure is really in the DOING of it.