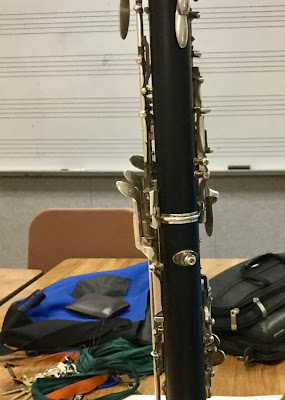 Mercifully, THIS one didn't happen to me.  But my poor student was playing an audition for his orchestra, and reached up with his right hand to turn the page of his music.  And heard a "plink".  And when, a split second later, he returned his hand to his oboe to continue playing, he found that his entire thumb rest had fallen off onto the floor, leaving only the post it had been mounted to.

With his hand now contorted uncomfortably, he finished the audition - ably, I am sure - and tracked down the crucial little piece of metal.  Evidently the screw that secures the adjustable thumb rest into its most optimal position had come out - never to be found again - so the thumb rest itself now can escape at will.

He devised a workaround - teflon tape to keep the thing in - but let this be a lesson to all of us. 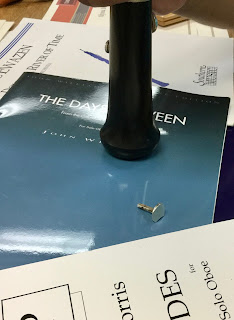 Seriously, the oboe is not your friend.  It's like a cat trying to slip out the door - it's just WAITING for an opportunity to betray you.  Don't get complacent.